How to be #hashtag savvy with your social marketing 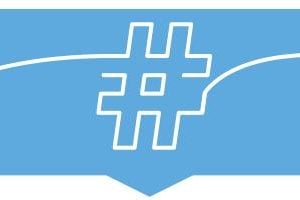 The hashtag has been the social media phenomenon for the past decade, with its humble beginning back in 2007 on Twitter. However, if you’re new to using social media for marketing then hashtags can be quite tricky to grasp the concept of.

What is a hashtag?

The hashtag is the use of the number sign (#) which has been adapted to mark keywords and/or topics in social media. Twitter was the first social platform to adopt this new form of categorising and it is believed that the first hashtag used for this purpose was in August 2007.

Social technology innovator Chris Messina tweeted his idea about using the # sign to bundle tweets and conversations about events and topics so it was easy to find relevant topics. And so #barcamp (a global technology conference) was the first hashtag used.

The evolution of the hashtag

Take a look at the table below, which shows when each social platform integrated the use of the hashtag and how they’re used. It’s important to note that whilst these social platforms now use hashtags, they don’t all use them in the same way that Twitter do.

The whole concept of marketing is built around reaching a particular audience, tailoring their experience for a more personalised experience. Hashtags should be used to reach your community and connect with them.

Use hashtags during events (conferences, festivals etc) to tweet about them. If you have relevant content to post on a trending hashtag (eg, Valentines Day, SNL40, Apple, etc) then use those hashtags with your tweets.

A very big DO NOT DO rule is using these trending hashtags in your irrelevant tweets to spam and gain attention from those who are genuinely interested in that topic. It’s un-targeted, unprofessional and incredibly irritating. Don’t be that guy.

You can also use unique hashtags to host or participate in public Twitter Chats. These are a brilliant way to connect to people with the same interests and share knowledge and opinions. Social Media Examiner has a brilliant post about how to host a Twitter Chat which you can read right here.

Hashtags are used slightly differently on this social platform. When you post a status with a hashtag in it, it becomes a clickable link which will take you to the feed of that hashtag – everyone else who posts a status with that hashtag will appear in that hashtag’s feed.

I advise that you should only use hashtags on Facebook if you have a particular campaign running. Using one-word tags (e.g. #marketing) can get lost in the feed and they’re not particularly targeted. However a campaign (e.g. #BringOurGirlsBack or KFC’s #DoubleDownDog) helps users feel part of something that doesn’t necessarily have to be an event. If you have a particular offer/competition that you want people to be a part of then a unique hashtag is definitely the best way of tracking who gets involved.

The one particular downside to Facebook’s hashtags is that there’s no way to search for hashtags using the search bar. If you search a hashtag then the suggested results will always show a page or person that’s most relevant. You can ignore these though, hit Enter and see the results for that hashtag feed and unlike Twitter, there isn’t a little sidebar that shows the most popular hashtags.

The image-based social platform has heavily integrated the use of hashtags. You can have up to 30 different hashtags per photo that you post. Instagram hashtags can increase your following dramatically, especially if you’re able to participate in the trending tags.

#MondayBlues and #tbt (Throwback Thursday) are great starters as they’re a guaranteed weekly trends which you can participate in and increase your following and interactions.

Locations are also a brilliant way to utilise hashtags on Instagram, depending on your business. Tourists especially love to use location tags to see what’s about if they’re either in the area or are looking to visit so if posting with location hashtags is relevant for your business then I most definitely recommend it!

Google has used hashtags differently from the start. Instead of letting users organise and monitor conversations, Google Plus hashtags allow for bigger, greater exploration of the social platform – both by Google and by users. They work brilliantly for exposing your updates to a wider range of people; if you use a hashtag then more people outside of your extended circles like and comment on your content.

What should be noted though, is that specific hashtags (such as events, locations, games) don’t perform particularly well. Try using descriptive hashtags (e.g. #marketingtips) to help Google understand what your update is about; the search results are then powered by related hashtags. For example, if you search for #FoodandDrink then results that may have not even used that hashtag but instead have #Dessert and #Recipe will show up.

If there is a hashtag in the description of a pin then that tag is clickable. There doesn’t appear to be any rules or limitations for the number of hashtags you can add to a Pinterest post.

If you do a search in Pinterest using a hashtag, search results can include all types of words and phrases from the hashtag, which makes it a difficult platform to use hashtags on at all. My best recommendation for Pinterest hashtags is to use them for branding and help spread further awareness of your event, campaign etc.

Let me give you some last tips

It can be overwhelming to begin with, but when you’re familiar with particular social platforms, this knowledge will just come to you. Bookmark this page and come back to it later if you need to extra reference when it matters.

Until next time, happy hashtagging!

Not getting the reach you want on Facebook but begrudge spending the money to get it?
June 10, 2017

How to Organically Win with Business Pages on Facebook
May 13, 2015

What’s the REAL difference between a Facebook Profile and a Page?
April 8, 2015